Last year I started writing a weekly post on what had been happening in my classroom that week. I managed to keep this going for 25 weeks then I stopped. I can’t remember why. I really enjoyed reflecting on my week and so am going to start it up again.

First week of 2020 and the school was calm. It had been a tough few weeks in the run up to Christmas so it was nice to finish the week feeling positive again about my job.

Here’s what my classes were doing:

S1 – I have a class for one period a week to provide extra numeracy. I’ve found that often my pupils are ok with completing calculations but struggle when faced with contextual problems and reading instructions. For our first lesson I wanted to see exactly how well my new class could follow instructions so I found this task in a book we have in the department. 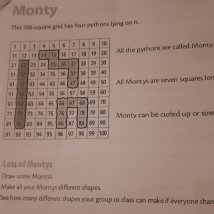 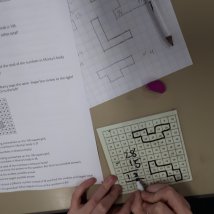 The class took well to the initial task but as expected, stumbled when faced with reading and interpreting the follow on instructions. This meant that I was giving far more input than really should have been given. Hopefully as the weeks go on I can work on improving this area with my class.

S2 – working on stem and leaf diagrams this week including drawing, interpreting, finding mean, mode, median, range and back to back. I used a worksheet from Corbett maths sheet with an extension task from Don Steward. Most of the class found the worksheet very straightforward and I regret not selecting fewer questions for them to try so that more of them had time to go onto the extension task.

S3 – working on probability, mainly focussing on single events. I introduced the idea of probability with this problem from Would You Rather Math 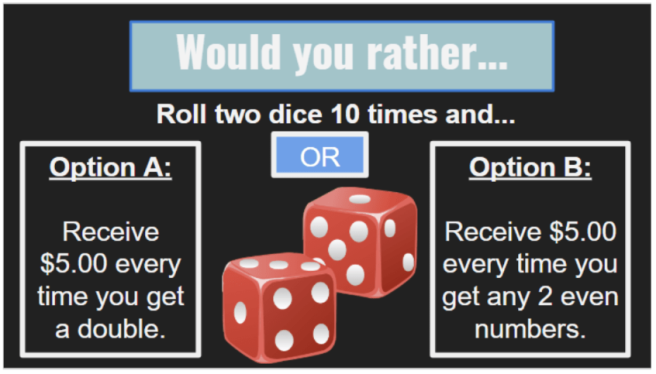 This led to really nice discussion about chance and which option would be better. We looked at single events with added element of problem solving involving probability spinners. We used these tasks. The first one I found on TES and the second is from Go Teach Maths. 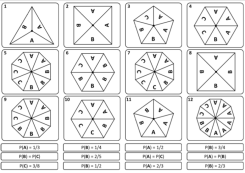 To introduce the idea of finding probability of two events we played dice bingo. This was the initial instruction given.

After we played once, I asked the class what they noticed. We discussed why certain numbers were more likely than others then filled in the corresponding sample space. Then we played again, with me asking pupils to consider which numbers might be best to choose. Then when working on further problems the class really seemed to understand how the probability was calculated.

N5 – similar shapes covering similar triangles, similar area and volume. I decided to teach all three together. After looking at how scale factors were calculated we worked through example problem pairs. This took a whole period but really helped their understanding when completing individual practice. The next lesson we looked at more advanced problems, again mixed length, area and volume. I think the class benefitted from working on mixed problems as it led to more thinking and less repetition but it was far more time consuming to create a mixed sheet.

Higher – working on differentiation with a specific focus on stationary points, curve sketching and closed intervals. Most of the work we completed was from the textbook but I have considered asking this as a follow up task when I next see the class:

Other thoughts from this week: