This week started with a snow day and ended with a holiday so I was only at work for three days. Even though, it was still a very busy week. We had a mini inspection, with a team from the Council in doing focus groups and observations.

My classes this week were working on:

Worksheet of the week

I used this worksheet from www.maths4everyone.com.

I really like the way it is structured, building in difficulty and not too many questions. Most of the class managed well with it, using previous knowledge of angles to calculate the bearing. I’m not sure I’ve ever spent much time on this previously but will definitely be doing so in the future as it provided great angles review and showed me who understood the concept of a bearing (use north line, measure clockwise, writing in 3 figures)

Question of the week

As a review of simplifying expressions, I set this task for my S2 class. I took the questions from www.startingpointsmaths.blogspot.com but added a couple extra.

Having the answers and trying to create the question gave a good structure and it meant nobody was making the error of adding x’s and y’s together. This task also allowed a review of negative numbers and I was pleased to see some of the class using the number line that is up in my classroom.

Resource of the week

Following our recap of simplifying the S2s worked on this task from www.mathspad.co.uk. 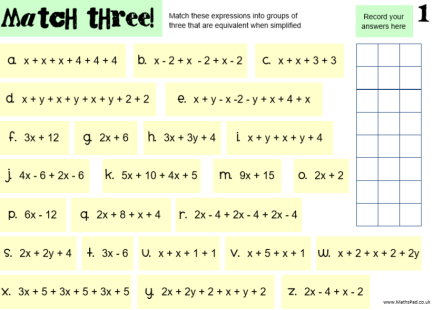 Often matching tasks require a matching pair to be found. I really appreciated the added dimension of finding three equivalent expressions. Despite having spent time on the recap task described above there will still a few in my class who wrote that x + x + x + 4 + 4 + 4 = 15x. I need to keep emphasising the need to collect like terms.

Task of the week

The S3 class were having a quick look at foreign currency. The basics of converting currencies is pretty straightforward so I wanted to find more challenging tasks. I set the class this question taken from a N5 Lifeskills paper.

Once they had completed it they were asked to create their own word problem involving at least three different currencies and provide a fully worked solution. As an extension to this I asked them to make a non-calculator question.

Re-used task of the week

In S3 we spend a lot of time on percentages, essentially covering all of the N5 content. This means that in N5 we don’t need to reteach it but do need to review it. So, rather than creating a new task, I re-used a sorting task from the S3 course. The task involved deciding whether a question was appreciation/depreciation or reverse percentage. 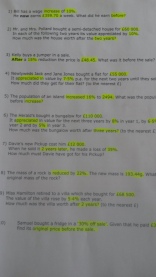